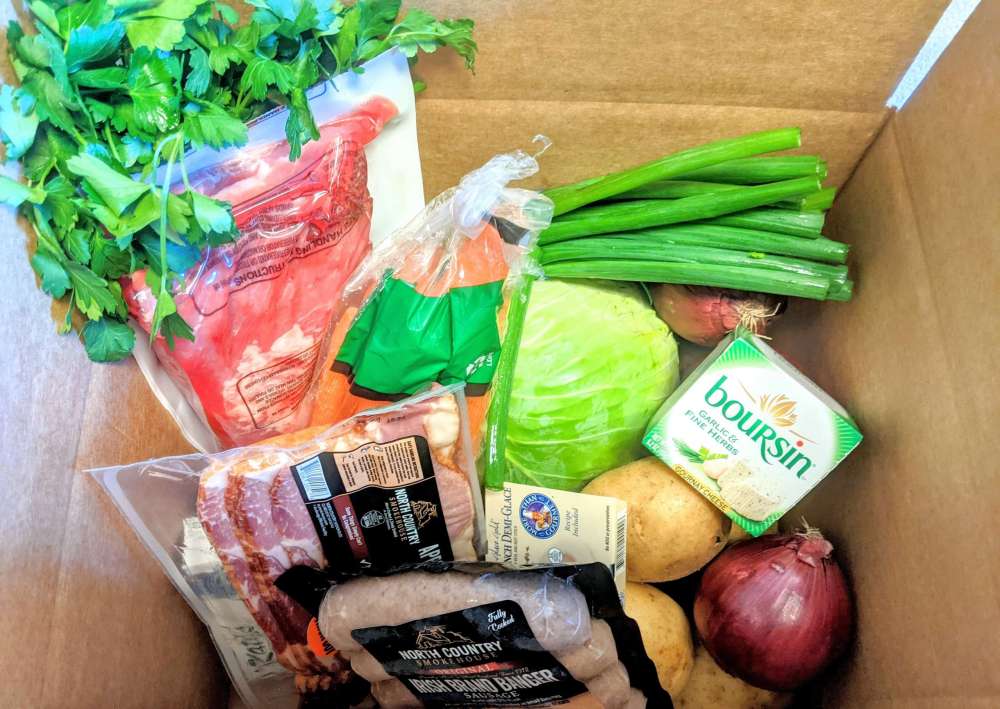 Meet Our Local Partners By

We are excited to introduce meal prep kits inspired by chefs in Maine. This month we are featuring Dave McGuirk & Luke Benning’s chef box for a traditional Saint Patrick’s Day Dinner with ingredients to make corned beef & cabbage, and colcannon & bangers with onion gravy. This box also includes recipes for Dave’s Colcannon & Luke’s Onion Gravy, a coupon for a free chip butty and two chances to win a $25 gift card to The PaddyWagon – the fish and chips food truck launching this month.

Dave McGuirk & Luke Benning met at the Westin in 2015 and bonded over mutual love for sarcasm and British humor, television and politics and have worked in many places in Portland ever since.

Dave was born and raised in Dublin, Ireland and started cooking when he was very young for a catering company where his father was a food and beverage director. He has been cooking ever since. Dave has lived and cooked all over Europe, moved to DC in 2009 where he opened many restaurants and was an Executive Chef at Mission/Hawthorne, then moved to Portland in 2015. In Portland, he held Executive Chef positions at Saltwater Grille & The Woodlands Club.

Luke was born in San Diego, California. His father is from South London, and the family would take trips there in the summer. Luke fondly remembers always being excited to go to a pub or a chippy for the first lunch there and the sweet barley smell of malt vinegar. At first Luke studied Theater and Classics in Vermont, then moved to Portland, studied at the CIA and started his first job as a line cook at the Westin where he met Dave. Luke always found his theater training helpful in the kitchen in a way that it requires working and communicating in real time.

The idea of the PaddyWagon came in September of 2020. Both, Dave & Luke, always wanted to transition from restaurant kitchens and to cook on their own terms. After being disappointed with Irish and English food representation in the area, they wanted to open something that hasn’t been done here properly yet. The idea with the truck going back to the food that we got as kids, very simple ingredients with amazing quality food shining by itself. The focus will be on traditional English and Irish beer battered fish and chips, with quality ingredients. With sourcing some of these ingredients from Native Maine, they are actually able to do a gluten free batter which makes it so much more approachable for many people.

In addition to Fish & Chips, they will serve Chip Butties – a british comfort food with french fries, marbleized egg, brown sauce aioli on Botto’s buns (not GF). Drinks will rotate but will feature a mix of mocktails with the flavors of british spirits, and traditional teas with deep fried mars bars for dessert.

The big launch is going to be on St Paddy’s day at Freerange Fish Lobster at 450 Commercial St. Portland where you would normally find the truck parked Monday-Sunday 11am-7pm. The PaddyWagon team will serve Bangers & Mash for their Saint Patrick’s Day Special.

Who does not love a deliciously smoked meat stick? Now add the benefits of no...
By

Apple Acres Farm is southern Maine’s certified organic pick your own. They also have a...
By